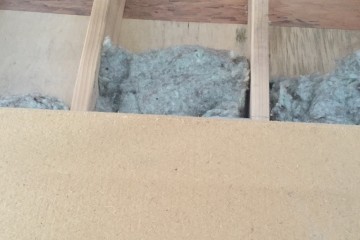 One of the most important elements of the WISER project is to highlight and showcase reuse. The WISER team have dedicated a lot of time to researching and identifying materials that may be suitable for reuse in the construction of our prototype 3D textbook and education centre.

Early in the project, the old Emerald project construction site in Ballymun was identified as a possible source of reusable materials. Construction of the Emerald Project housing scheme was temporarily suspended in April 2011 due to the contracting company going into liquidation. A new contractor was appointed to partially demolish and complete the project at a later date.

Following discussions with the new construction company, MDY, it was agreed that the WISER team would be allowed to access and remove both windows and sheeps wool insulation from the site for reuse in the refurbishment of the boiler house. MDY were unable to utilise these for the Emerald project as the manufacturers would no longer stand over the products due to the amount of time they had spent on site while construction was suspended.

The windows, although in perfect condition, could not be used in the exterior of the building as their certification had expired. Therefore, they now have pride of place in the interior of the building, acting as viewports into our education room and ecocluster workshops.  This will allow the vibrancy of the ecocluster reuse activity and educational programmes to be experienced by all visitors to the centre.

The sheeps wool, as a natural and sustainable material, is an ideal choice for inclusion in the project as an insulator and has been utilised in the west façade of the building.